The theme of the 16th Liberation concert is “Homage” and builds on the program of the successful 2020 edition of the concert. We will never forget how the lives of thousands of young men and women so suddenly ended in the struggle for our freedom. This year’s program honors their sacrifice and dedication for the liberation of a people they did not even know.

During this year’s Liberation Concert, we will experience the world premiere of the special hymn written by composer Mark Putz in honor of the new Visitor Centre to be. This hymn is an everlasting gift by the Liberation concert foundation and philharmonie zuidnederland to the American Battle Monuments Commission.

Henry Purcell (1659-1695) wrote ‘Funeral Music’ for his beloved Queen Mary in a time which shows similarities with our precent time. In her thirties, Queen Mary became victim of the smallpox epidemic which spread throughout England in 1694. In the bitter cold, her remains were carried to Westminster Abbey. The coffin was accompanied by drummers and a brass section which played the Purcell’s death march by which this Liberation concert is opened.

The Belgian film composer Dirk Brosse (1960) wrote ‘For the unknown soldier’ a modest piece for a string orchestra and harp which seeks to remember those who fell and rest in unknown graves.

The American composer Samuel Barber (1910-1981) absorbed the traditional European music and translated it into his own primal American compositions. In his ‘Knoxville: Summer of 1915’ for soprano and orchestra, the composer looks back to his own childhood and a perfect summer evening in the Southern part of the United States. As a 6-year-old boy, Barber heard the sounds of the carriages, passers-by and a rare automobile on the streets. His thoughts strayed to his beloved relatives. While praying, the child fell asleep by the gentle music.

In his ‘Militaire Symfonie’, Joseph Haydn (1732-1809) is searching, by using percussion and trumpet signals for a military atmosphere. Particularly in the second and fourth part the hellish tumult of war can be vividly heard, swelling from a terrifying start to a heroic highlight.

You are cordially invited to attend the Liberation concert and to enjoy these pieces as they are performed by the philharmonie zuidnederland led by conductor Sander Teepen and soloist Hannah Morrison.

Sunday September 19 the 16th Liberation Concert was held on the Netherlands American Cemetery in Margraten. Besides the visitors present a livestream was available on the ABMC facebook channel which attracted tenthousands of viewers from…

BY CAR Coming from the A79 or Maastricht. A79 take exit Cadier and Keer / Vaals. Follow N278 through Cadier and Keer towards Margraten / Vaals. Continue to follow N278 until you reach the American Cemetery. There is ample parking space at the cemetery.

Coming from the A76 or Parkstad. A76 take exit 7 (Vaals / Simpelveld). Follow the N281 in the direction of Vaals until the N278. N278 direction Maastricht through Nijswiller and Gulpen to Margraten. Follow Rijksweg direction Cadier and Keer / Maastricht until you reach the American Cemetery.

BY PUBLIC TRANSPORT Line 350 direction Aachen Hauptbahnhof or Maastricht, get off at the stop ‘Amerikaanse Begraafplaats’. www.92920v.nl

BY BICYCLE The American Cemetery is easily accessible by bicycle. You can take the bike path along the N278 Maastricht-Vaals. Bike stands are available at the cemetery. 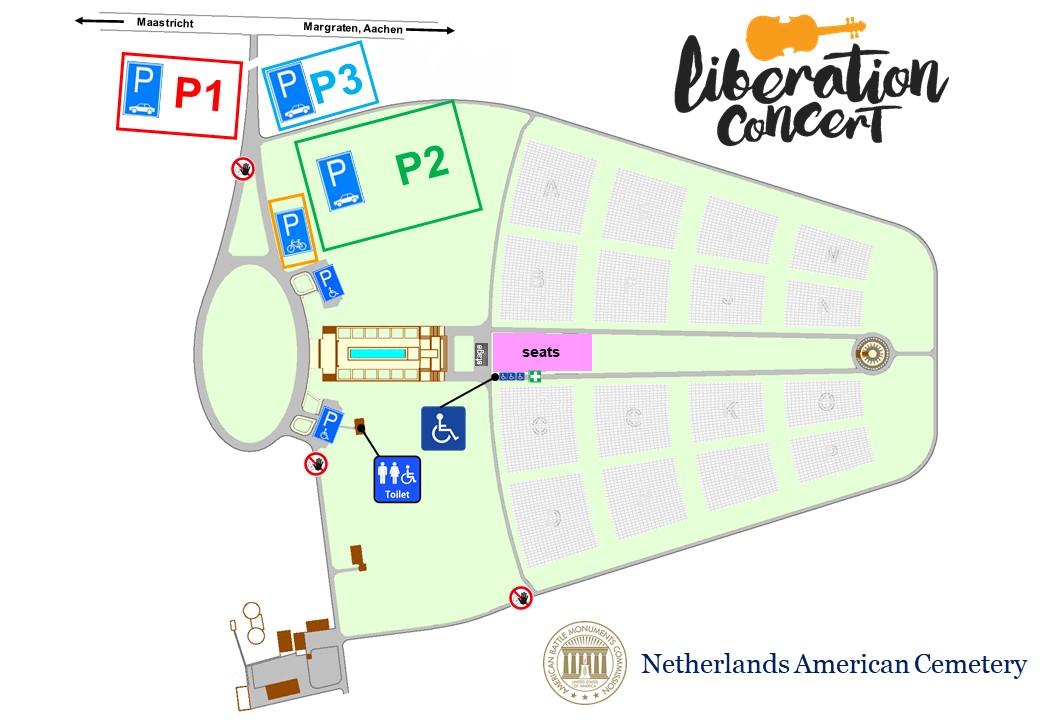 Anyone can attend the concert, admittance is free. Because of Covid19 registration and reservation is obligatory. Because of social distancing measures we only have 700 seats available for each concert. There are special places available for the handicapped and one companion. The concert takes place at the American Cemetery and several special rules apply here: visitors should behave in a respectful and quiet manner and respect the crosses. We advise you to dress modestly, even in hot weather (no shorts or sleeveless t-shirts). Making of audio- and video recordings of the concert -other than accredited press- is not allowed. Also it is not allowed to bring large bags. Pets are not allowed.