By George DeswijzenSeptember 20, 2020 No Comments

Sunday September 20 the 15th Liberation Concert was held on the Netherlands American Cemetery in Margraten. The last couple of months a lot of work was done to organise the concert in these difficult and uncertain times. Strict precautionary measures weren taken to guarantee a save concert for the 1400 visitors. Besides the visitors present a livestream was available on the ABMC facebook channel which attracted thousands of viewers from all over the world. A world premier for the Liberation Concert.

The philharmonie zuidnederland played their first concert at 12.00h and the second concert at 15.00h under the lead of conductor  Arjan Tiel and with soloist Lei Wang. Four impressive pieces were played which told the story of “struggle”. The concert opened with Adagio ma non Troppo by Beethoven, followed by the The unanswered Question by Charles Ives, The Lark ascending by Vaughan Williams and ended with the Trauersymfonie by Haydn.

Before the start of the concert ABMC secretary Matz, Ambassador Pete Hoekstra and governor of Limburg Bovens welcomed the guests and spoke of the importance of remembrance, cherishing freedom and the bond between Limburg and the United States.

After the concert finished a special ceremony took place at the wall of the missing. Recently four soldiers which were missing in action have been identified. Ambassador Hoekstra, Governor Bovens, mayor Akkermans and NATO general Vollmer placed a rosette at each recently identified soldier to mark their identification.

The organizing foundation of the Liberation concert is very pleased with this years edition and would like to thank philharmonie zuidnederland for a great performance and cooperation towards September 2o. The organisation looks with lots of energy already ahead towards the 16th Liberation Concert in 2021. 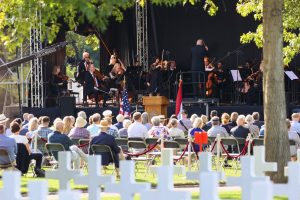